As you can tell by my infrequent posts, I’m not that interested in social media. I don’t like (or use) Facebook, Twitter, Instagram, or much of anything beyond email. I may have set up a couple accounts years ago, but they have all fallen into disuse.

I decided to seek new employment. Now I see application forms prompting for my social media addresses, and letting me know that they’ll collect information from my social media sources.

In identity speak, my online identity is very sparse in the area of social media attributes. So, not liking other forms of social media, I’m going to try to breathe some new life into my old blog. I hope this proves mutually beneficial, and that we can learn from each other.

Over the years we’ve spent lots of time worrying about the security characteristics of various types of authentication tokens, with broad consensus that static passwords reek. And we’ve put lots of thought into the processes we use to vet users’ identity and to bind tokens to users. And of course we’ve put lots of effort into lifecycle management and processes to disable authenticators when they are no longer needed.


NIST Special Publication 800-63-1 is a pretty good exploration of topics like those mentioned above, and describes how they contribute to an authentication event’s level of assurance. However, I don’t see any mention of back-end authentication systems in the NIST document.


Even if attackers are unable to actually steal secrets and/or keys (thank heavens for hardware security modules), they may be able to compromise the back-end servers to maliciously exercise the secrets and/or keys, thereby generating what appear to be valid certificates, assertions, or OTP values.


Even if attackers are unable to maliciously exercise a back-end server’s secrets and/or keys, they may be able to inject malware onto a RADIUS, LDAP, or OTP server that returns a success status for every authentication, bind, or verification request.


Yikes! How do we adequately protect the back-end? And how should we include back-end considerations in determining authentication level of assurance?

Over the past couple years I’ve been repeating these words so often that I’m now calling it Schleiff’s Law. It may seem presumptuous or vain for me to name something after myself, but I got tired of waiting for anyone else to do me the honor.

Much of my time is spent working on ways to better authenticate computer users to the services they access. It’s now generally accepted that passwords provide only nominal assurance about users’ claimed identity. We generally want to attain better assurance, hopefully without severely degrading usability, and at reasonable cost. The following paragraphs discuss how Schleiff's Law applies to various authentication methods:

I believe the authenticators most resistant to Schleiff's Law are OTP hard tokens (without any connection to the PC) and out of band passwords. Of course, even though they may avoid Schleiff's Law, they are still susceptible to other attacks, most notably man-in-the-middle attacks.
Posted by Marty Schleiff at 7:05 AM 4 comments:

I've been tinkering with a new concept (at least it's new for me). It's a way to prove that you were in possession of particular data at a particular time. I hope people will find this useful to protect copyright on their creative works, or a way to protect ideas before revealing them to others, or a way to keep rights to your own ideas that you had prior to beginning work for a new employer that makes you sign away your rights to ideas conceived while employed there, etc.

Anything you can represent digitally (even a sketch on a napkin can be digitally photographed) can be given an identifier, and be tagged with descriptive attributes. And a set of attributes including at least one identifier constitutes an identity (in this case identity for data). I call this identity a DataClaim.

A DataClaim is a signed SAML assertion about some data, with an identifier based on a hash of the data, and including attribute assertions about the individual in possession of the data, a timestamp, and some other info. It will be interesting to get some feedback on this concept. Please take a peek at the following URL:

https://www.MyDataClaims.com
It's not quite in production yet, but the functionality is pretty much in place. After my upcoming vacation I plan to generate a new keys and certificates for signing the SAML assertions, and then I'll declare an official launch of MyDataClaims.

Let me know what you think.
Posted by Marty Schleiff at 11:26 PM 3 comments:

A couple months ago we made another couple tweaks to our identity model (see v20 below), and nothing has changed recently. I think that means we're pretty satisfied with it's current state. We had a grueling couple months trying to figure out our direction for dealing with multiple personas. Now we're evangelizing our new direction and seeking support from around the company.

The new economy has curtailed most of my involvement in external activities. I'm now asked to focus more on internal projects. So to many of my friends, it may appear I'm hibernating until economic conditions improve. 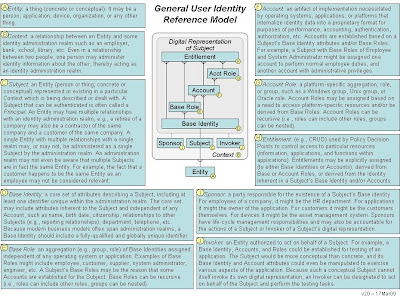 I'm a complete slacker in trying to lead an effort for the Concordia Identity Reference Model. This is due to lack of bandwidth, low levels or participation, and my own frustration at conceptualizing things differently than most other people.

At my day job we continue to use and evolve the model. We used it to facilitate discussion about Testing IDs, and to illustrate our determined approach. In November we shifted discussions from Testing IDs to individuals with Multiple Personas.

Here's today's version of the model: My Preferences for the User Identity Reference Model

I haven't yet received any feedback on this version of the diagram, but it represents my current preferences. 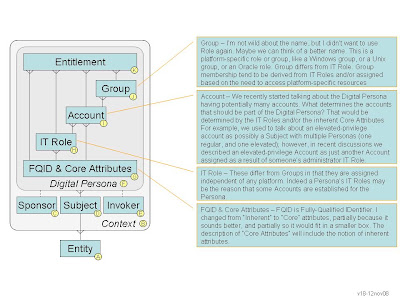